Revolutionary Greetings to You. My name is Heriberto Garcia. I’m a politikal prisoner that holds the AEH here in California. I’m dedicated to the movement/struggle with the international view of ending oppression—anti-imperialism. I became politicized thru my experiences from Jury Hall, to CYA, Level 4 Yards, and SHU’s in California.

I’m a 26 year-old anti-imperialist organizer, theorist, and artist with a politikal line that revolves around five principles: peace, unity, growth, internationalism, and independence. I became radicalized throughout my incarceration. I began questioning things such as daily struggles of the people inside/outside, methods, and politiks. The more i continued in my quest for understanding, i realized how the struggles of all oppressed people are connected to the mass struggle against U.S. imperialism. It is this questioning of mine that has opened my eyes to the still unfolding truth. It is this constant questioning that has made me the human being that i am today. I know what i want to do in life, and that is to fight imperialism and liberate the peo­ple. To abolish the systems of White Being, to achieve emancipation.1 I don’t do this for glorification, ratings, to be “controversial” or to give my life meaning. I do it because it’s what is right. That is freedom. As a person who is consciously oppressed, resisting is what i do. I fight whether it is thru theorizing, literature, teaching, or learning, on the ground or from this cell, spreading the message of unity and revolution in this time of movement. This is my life.

I come from a line of migrant family. On my mom’s side, i’m Grman/Spanish, from my Dad’s side Mexican. I was born in Michoacán, City of Uruapan (Mexico). I traveled back and forward from Mexico to the U.S. throughout my childhood, living in struggle. Mom is a hard worker. My father is a federal prisoner, also a hard worker. I was introduced to the gang life at the age of 11. I ended incarcerated at the age of 16 and have been down ever since.

Being introduced to politiks behind the wall and meeting people from different walks of life, i started reinventing myself as a New Man and accepted everything i ever knew to be false, including religion. Throughout this time of reflection, i switched up my politiks, changed my perspective. I began practicing my theories of resistance and organizing. After our hunger strikes here in Cali, my politiks evolved and my perspective became international. I started reaching out seeking educational material and providing critical analysis on organizing prisoners while i was inside the SHU dungeons. I’m still evolving with the struggle and will continue as long as i’m alive.

We all walk different paths, alleys, dirt roads, or simply carve our way to the present. I don’t think we need to experience the same things to understand where We are each coming from or who We are. We can learn from each other’s differences and determinations on where We’re trying to be—the things that We are doing now, the work that We put in to make the today of tomorrow a better now.

While professionals analyze our situation in the struggle attempting to understand it, We live it. We’re not part of the privileged that have the luxury to educate ourselves, or drop time to write about (no my bad—the time to “articulate”) contradictions; but, for the most part, We the Bandannas understand our fucked-up situation can be thanked to the Suits and Ties up on the roof of that sky scrapper. Yet, once you introduce revolutionary knowledge to a Bandana, she/he becomes a devoted comrade of the international struggle, who understands that political power comes from the barrel of a gun. Now transformed into this new conscious, principled, and commune-minded being (a New Man), the Bandana being that she/he was now is a comrade who will do anything and everything to transform/evolve their fellow Bandanas, so they may achieve a higher level of consciousness as this New Man.

I create art—narrative, talk, paint, sketch, draw, theorize, conceptualize—for the people and because i love it. I like the process of materializing an idea. When it comes down to art, i take pride, time, and dedication. There are times when a piece might take me weeks to finish and times which take only hours. I know most imagine prisoners just sitting on their asses and watching T.V. and consuming, which is true in a way. But for “active” prisoners, we pick up the slack of others, then we deal with these pigs always trying to shove us in a box somewhere. I’ve been kicked out of “rehab” groups, creative writing classes, “church,” etc., which are all places that can be converted into semi-seminars for revolutionary study. I pose a problem to the class and we share dialogue, or i provide input on a subject containing revolutionary elements. So mysteriously, my name is no longer on the list. I’ve been dealing with strip-searches, harassment, cell searches, “hate” and that bullshit. I don’t care, i understand the risk of spitting truth and/or living in defiance of (wh ite) imperialist authority. I embrace the struggle and the learning process—and for those times i bleed, it is then that i know i am alive. I make the best out of the situation i find myself in. I’m not going to stop creating.

I think that there are three levels of politikal organizing here in Cali prisons. The first, to achieve unity, respect, and understanding amongst the oppressed. Second, to build the politikal consciousness of the people. Third, to mobilize the people towards emancipation thru radical sets of politiks. Right now, we are at work on level two.

The first level of struggle is one of peace and unity. In prisons here in Cali, this was exercised throughout the hunger strikes. But didn’t really make an impact until the ones in 2011. Which is when the “Agreement to End Hostilities” came into effect. Due to the influence that prisoners have out there, we can expect that what happens in prisons is then practiced on the street amongst the barrios-neighborhoods. To achieve peace and unity amongst the oppressed and therefore spreading this practice to the rest of the public.

Second, is the level of knowledge and growth, where we convert the prisons into some type of school, an educational campus so that all that come in can study, learn and become part of a teacher-student/student-teacher method and way of life, as opposed to the banking system of education practiced in capitalist society. This will revolutionize the incarcerated masses, whom will then take this new set of politiks to the neighborhoods-barrios to which they return, transforming the ghettos.

Third and finally, is the level of mobilization. Once level 1-2 have been accomplished, level 3 is the key to revolutionary emancipation. The land stolen from the people will be returned to the people. The masses will own the means of production. Institutions from the people for the people will be in every hood. New table of laws for the masses will be set by the oppressed. This will come only after ending imperialism, and, as we know, imperialism will not hand over power. It is up to us to take it. To achieve this, we must practice this line not only locally, but at an international level to bring independence to all. This last level is a battle and only through practice we’ll know what we’re up against here at home and how to defeat it.

The schematics I have presented to you outline a blueprint for the three levels of prison organizing, as I sit in my cell struggling achieve this. Struggling to be free, to stay sane. If not this, then what? Wait for the day of inclusiveness and make it a holiday? Reform a law, pass a bill, recycling the carrot of a pipe dream? Allow the colonization, genocide, and displacement of people to continue? Should I just suppress my feelings, my ideas, my being? Turn my cheek and be happy to plainly exist? Miserable, but existing. Eating, drinking, consuming crap—but existing. Fuck that! I will do what I can. I will attempt what I can’t learn from the process and do it again. For the love of humanity, for the love of freedom, for the love of abolition.

True Leap Press is a radical publishing collective based in Chicago, Illinois. We support the intellectual struggle and advocate for the building of mass-based projects for antiracist, anticapitalist, and antipatriarchal political education. 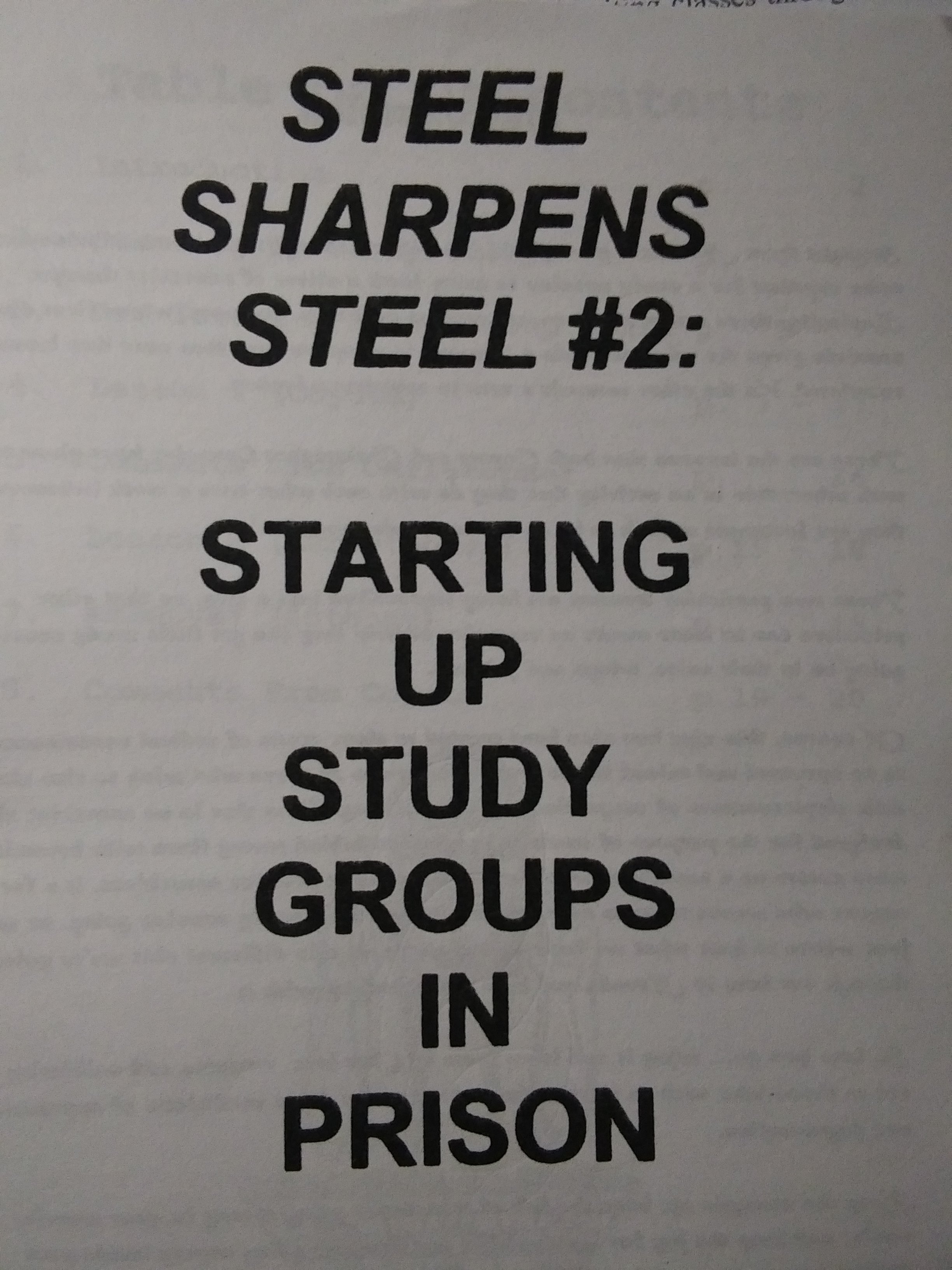